Trygons – A heavy mould turned into an AGV

Despite using, and developing, advanced manufacturing technologies, Trygons relies heavily on manual work when it comes to intra-factory logistics. When manufacturing roofs for trucks, for example, moulds weighing 500 kg are lifted and carried by workers from workstation to workstation.

Making one piece requires fours stops in the workshop and takes altogether several days. First a gelcoat is painted onto the mould, then the cut fiberglass is placed inside the mould and the resin is infused and cured in a vacuum bag. After demoulding, the mould is cleaned and prepared for the next production cycle.

The L4MS experiment offered Trygons an opportunity to find out how to benefit from using an AGV (Automated Guided Vehicle) to automate the moving of moulds. 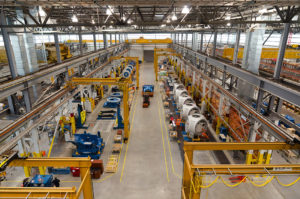 Trygons was joined by specialists at the National Technical University of Athens (NTUA) and its Institute of Communication and Computer Systems (ICCS). They started by creating a digital twin of the manufacturing process. This was done with the 3D simulator Visual Components provided by OPIL.

“3D simulation of the complete manufacturing process was very useful for us, and Trygons already considers using it with further development projects,” says Senior Researcher, Dr George Avdikos from ICCS.

OPIL platform to connect operators and the AGV

ICCS specialists developed the solution on the OPIL platform to which an AGV was connected as well as the workstations. The mould was actually turned into an AGV by attaching wheels, a microcomputer and a specific printed circuit board to it.

The AGV starts moving when it receives a command from OPIL sent by the operator at a workstation. It follows a white tape attached to the floor with the help of a magnetic sensor. When it reaches the required workstation, it stays there until the work at the station is done. Then the operator presses a button on a tablet and OPIL sends the command to the AGV to start moving. This is repeated at four workstations in the production unit.

When testing the solution, the following Key Performance Indicators were confirmed:

“We manage to validate a proof of concept: communication between the AGV and the OPIL platform through a low latency communication link. This technology can also be applied with minimal customisation to other companies when automating their logistics or production. We have discussed this with customers from the automotive and marine industries,” George Avdikos says.

The cost of the project was 42 500 EUR including materials and work involved in design, development and testing, and production downtime. It took approximately 2.5 months to design the solution and 2 months to test it.

Partners in the L4MS experiment: