Slovenian company ELVEZ manufactures automotive light housings, where each light requires its own unique assembly device, which is typically very large and cumbersome. When ELVEZ stops producing the parts to match the regular demand, assembly devices must not be discarded because they are required such that the supplier company is able to produce spare parts for at least the next five years. This means that the assembly devices are stored at the company for those five years after the production has ceased. Production of spare parts is a low quantity piece production scenario and usually occurs only a few times per year. This poses a problem because the large, cumbersome assembly devices must be swapped into the production process in order to cover the demand for the spare parts. It is therefore very useful to have a single robot cell available which is capable of assembling many different types of lights, while also being rapidly reconfigurable for alternating production scenarios.

ReconCell implemented the assembly of two different automotive light housings for ELVEZ, where the assembly process from one type to another can be swapped in minutes. The key for this implementation were the innovative, passively reconfigurable fixtures (non-actuated Stewart platforms) developed in ReconCell. They are integrated into the workcell as peripheral modules using a Plug and Produce connector developed in the project. The developed ROS-based software architecture enables quick integration and control of different modules that are added to the cell on the fly.
Reconfigurable workcell 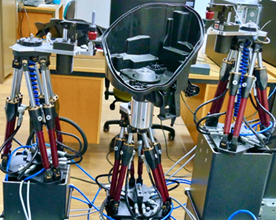 Reconfigurable workcell from the use case

Implementation time: 469 days, including the development and manufacturing of innovative fixtures and other hardware elements, which is very time consuming. (Moreover, cell design, cell architecture, module development and integration was done at the same time. With all software and hardware modules ready in advance, the necessary time for testing and quality assurance is estimated to 1 month).

Impact
Production Part Approval Process (PPAP) procedure was carried out to confirm the repeatability and reliability of the assembly process in the workcell. By implementing the ReconCell solution ELVEZ expects the return on investment in one year and a half and savings of up to 1.6 million Euros over the next five years. The implemented solution was demonstrated at industrial fairs including Hanover fair 2017 and Automatica 2018. A company Flex-Hex was spun off to market the developed passively reconfigurable fixtures.

Video of the assembly of an automotive light.

This experiment has been supported by ReconCellproject.